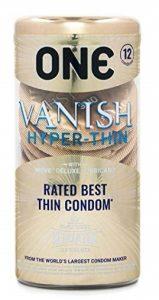 In the race to develop even thinner condoms, ONE manufactured the ONE Vanish Hyperthin condoms, and according to an unverified statement from the company, this is one of the best thin condoms in the world.

These numbers are impressive but it is also important to remember that studies conducted by a company on their own product cannot be trusted to have been completely unprejudiced.

Nonetheless, ONE Vanish Hyperthin Condoms are a product of advanced manufacturing technology and product design, a perfect blend.

Although the condom is made from a variation of latex known as Sensatex, it is 35% thinner than the conventional latex condom.

They are also smoother, softer, and clearer, which makes for a more pleasurable experience during intercourse.

Moreover, due to the delicate, elastic nature of latex, this ultrathin latex condom comes with extra premium lubricant for extra pleasure and lowered risk of breakage.

One of the common issues users encounter with many ultrathin condoms is that their wrappers are hard to open, which increases the risk of damage.

They also prove difficult to roll on, which further adds to the risk of damage. The One Vanish Hyper-Thin Condom, however, has an easy-to-open package and rolling on the condom is quite easy due to the extra lubricant, making the overall design, packaging, and functionality a success for ONE. 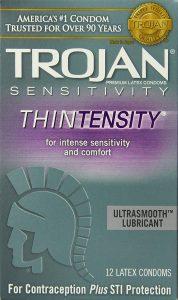 The Trojan brand offers over 30 different variations of condoms along with a myriad of sexual lubricants and toys.

Having been established in 1916, the company has been around for over 100 years and is currently the most popular brand in the United States.

As you are aware, Trojan manufactures condoms that serve a purpose that transcends mere protection, and one of those condoms is the Trojan Thintensity.

The Trojan Thintensity condom has been designed with one thing in mind; to provide the extra sensitivity and comfort that you would not get with conventional condoms.

The condom is 25% thinner than the standard condom, which gives you and your partner a more natural feeling.

User reviews indicate that the condom has a comfortable fit that feels snug and a little extra volume at the head for added comfort.

Additionally, Trojan Thintensity comes with premium lubricant in the package, which not only allows for easy sliding but allows the wearer more sensitivity as well.

The condom is made of premium natural rubber latex and even though it is 25% thinner than the average condom, you can rest assured that you are well protected and to guarantee this, each condom is electronically tested before being qualified for packaging and distribution.

Note, however, some users have stated that the condom is too big at the end and this denies them the characteristic feeling of ejaculation.

Other users have also complained that the water-based lubricant dries up pretty fast, so if you are using this condom it’s safer to have extra lubricant at hand.

It also goes without saying that anyone with a latex allergy should completely refrain from using this product.

Nonetheless, the Trojan Thintensity has received critical acclaim among users mainly due to its thin material that allows for a more pleasurable experience for both partners in terms of heat exchange and sensitivity.

Despite having different brand names, both the ONE Hyperthin condom and the Trojan Thintensity belong to a proud family of thin condoms that have gained popularity around the world for allowing users a more natural feeling during protected sex while still shielding them from the dangers of unprotected sex.

While both condoms allow the wearer and their partner a more pleasurable and intimate experience in comparison to standard latex condoms, I’d give a slight advantage to the ONE Vanish condom over the Trojan Thintensity for two reasons.

The first is that the ONE Vanish condom is thinner than the Trojan Thintensity, which translates to a more pleasurable experience for the same level of protection.

Secondly, the Trojan Thintensity has a water-based lubricant that seems to dry up faster during intercourse.

The ONE Vanish condom, on the other hand, has extra silicone-based lubricant which lasts longer, enhances pleasure for both parties, and keeps the condom in shape throughout its lifecycle.

Note: If you are looking even thinner condoms, this post will give you plenty of suggestions.

Quinten is a philosophy student with a LLB degree and a part-time writer from South Africa.