There’s a war brewing in East Asia these days. No, no one is expecting China to invade Japan or vice versa, instead there’s a war between the two countries about who is actually producing the world’s thinnest condoms. 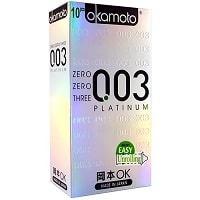 Recently, a 75 year old Japanese company called Okamoto Industries, producer of such condom brands as Big Boy and Crown, boasted that their Okamoto Platinum 003 condoms were, in fact, the world’s thinnest with the thickness of 0.038 mm (0.001496 in). This raised the ire of a Chinese condom manufacturer named United Rubber Products, based in Guangzhou, China.

United Rubber Products sells condoms that they believe are the world’s thinnest brand called the Aoni Ultrathin 001. The company says that their claim has been verified by Guinness World Records, so they actually hold the title. The Aoni Ultrathin 001 is measured at an official thickness of 0.001417 inches.

United Rubber Products believes they hold the title for world’s thinnest latex condom and are said to be challenging Okamoto Industries in court via a lawsuit. Okamoto Industries was asked to comment on the lawsuit but said they had not received official court papers as of yet so could not make any statements.

The lawsuit doesn’t seem to be having any effect on Okamoto Industries though, as their stock prices are up nearly 30 percent just this year.

In late 2013, another Japanese company, Sagami Rubber Industries, began claiming that their condoms were the world’s thinnest, which we wrote about last year. The Sagami Original 0.01 measured in with a 0.018 mm thickness. This is actually thinner than the Aoni Ultrathin 001 condom.

This is due to the differences between the condom materials. The Sagami condoms are made of polyurethane, which can be made to be thinner than latex.

Polyurethane condoms are less common in other markets due to their lack of flexibility. Some critics would say that this lack of flexibility can be a critical issue with condoms, since any major stretching could possibly break, burst or tear the condom, rendering it useless and ineffective against pregnancy and sexually transmitted diseases.

These condoms pass all the usual condom tests and have a few positive aspects – can be used with all kinds of lubricants and transfer heat better. However, due to their lack of flexibility it’s even more important to pick the correct size, when you plan to use a polyurethane condom.

In the United States, UPDATE: You can now find all these condoms (Aoni Ultrathin 001, Sagami 0.01 and Okamoto 003) on Amazon.co.uk and only Aoini 001 on Amazon.com:

It will be interesting to see the further advancements as these Asian companies continue to race towards their goal of thinner and thinner condoms.

Check out all the other ultra thin condoms here.