Whether you find them comfortable or not (however, this is something that can be solved by trial and error with the many different brands/types out there), condoms are a necessary part of life.

If you are with multiple partners, a new partner, or trying to prevent a pregnancy, condoms are the answer to that. They are the only things that will prevent you from a sexually transmitted infection/disease (STI/STD). That being said, there are plenty of interesting facts that you might not know about condoms. Read on to discover some of them.

1. Scientists believe that condoms were used way back in 11,000 BC.

Scientists are convinced that even the ancient men knew about condoms. Based on paintings found inside Grotte des Combarrelles in France, it was found that people have been using condoms for 15,000 years. Knowing this information is nothing new; neither can it bring new light into the importance of wearing them. They have been around for eons, which should speak to their relevance in sexual history and in sexual encounters as well. If you don’t want to acquire HIV or any other sexually transmitted diseases, then don’t risk it. The use of condom practically keeps you away from any diseases. This isn’t just a random number either, this comes from a study done by Planned Parenthood called “Effectiveness of Latex Condoms as a Barrier to Human Immunodeficiency Virus-Sized Particles Under Conditions of Simulated Use.”

3. France holds the world record for creating the largest condom.

During the celebration of the World Population Day in 2003, China made an 80 meter x 100 meter condom and placed it on top of a hotel located in Guilin, China., which was an attempt to beat the current world record holder.

The actual world record holder according to Guinness World Records is France who on December 1, 1993, placed a 72-foot condom over the Obelisque in Place de la Concorde, Paris, and marked World AIDS Day. Now that’s a big condom.

4. An average condom can hold a gallon of liquid. 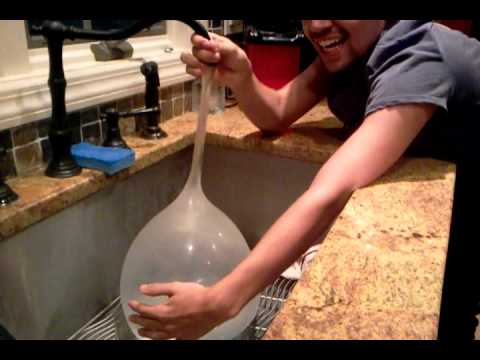 If you do a little experiment and put water inside a fully stretched-out condom, you’ll realize that it will work better than a huge jug or a canteen of water – and it won’t leak at all.

Considering the size a condom can stretch to, there shouldn’t be any discussion as to a condom not fitting (unless it’s the wrong size). The largest condom on the market, the TheyFit G31, which can nearly fit a Pringles can.

5. Before latex condoms were discovered, other materials were used.

If you are complaining about the thickness of your latex condom, think about this: the ancient Egyptians used animal bladder for condoms.

Apparently, the first large-scale use of condoms was in the 16th century and it was made of linen and soaking in a chemical solution in order to prevent syphilis. Other than these minor changes, the condom itself has had the same general appearance (except for add-ons like ribbing and other pleasure additions) have looked the same since the early 1920’s.

6. Condoms are a standard issue for military men.

This is true for the German military men of the 19th century. And from 1927 to 1931, all American soldiers were given condoms.

This decreased the amount of reported STDs/STIs, which can be based primarily on the fact that these men were being issued condoms to protect not only themselves but also those who were with them. Mainly because of this fact, you may now think of condoms to be as essential as guns while in combat.

When condoms were first being made, and in different areas, some condoms were not full coverings, they would only cover the glans and looking like tortoiseshell. Obviously, we can understand that this doesn’t offer the right amount of protection for both parties.

Science has definitely improved to allow for better protection and condoms that cover the man’s entire member. That being said though, Bill Gates is trying to make condoms different and “better” than their current design and is offering grants up to $100,000 to come up with the idea.

8. Condoms don’t take the fun out of sex.

If you think that wearing condoms during intercourse can negatively affect the way you perform with your partner, think again. With the different type of condoms today, that is no longer the case. It all boils down to wearing the brand that can give you the best fit and the best experience of all.

Also, knowing how to properly use them and not being afraid to buy them is the key to ensuring that you have a safe and happy experience. Plus, using condoms that fit correctly, and are comfortable will protect you from starting a family that you don’t necessarily want at this time, and that alone should make the sexual experience more relaxed and more fun as well.