So you’re in Thailand and you need some condoms. Well, I did some on-the-ground research and in this post, I’ll go through all the options that I found there.

Where to buy condoms

Almost anywhere in Thailand you will find a store that is open 24/7. There are 7-Eleven stores everywhere (8,469 stores across Thailand at the moment). They are always open and, of course, they stock condoms. Tesco Lotus is another big store chain with around 1,400 stores, and most of them are smaller Tesco Lotus Express stores that are open 24/7. Since 2013, Tesco Lotus also offers online shopping, so you can even order online or simply check what kind of products they sell and their prices.

Besides 7-Eleven and Tesco Lotus, the FamilyMart chain is also well represented in Thailand, and of course there are a lot of smaller family operated stores everywhere you go as well.

Another option is to purchase them at a pharmacy, and I found that the Watsons pharmacies have a particularly solid selection.

Big supermarkets, like Tops Market, will obviously also sell condoms, although the selection was pretty weak in one such supermarket that I visited.

I found the following brands in Thailand: Durex, Playboy, Onetouch Condoms, Lifestyles, and Okamoto. We already wrote about Durex, Playboy, and Okamoto condom brands, while Onetouch Condoms is a Thai brand that is not so prominent in the West. There is a German brand with almost the same name (One Touch Condoms), but it seems they are not connected in any way. Almost all of their condoms have the same width (52mm), which is basically an average size, but they are different in style (different textures, flavors, lubricants, and shapes).

Condoms are mostly sold in 3-pack boxes, while a few brands offer a bigger 12-pack. A 3-pack will cost you anywhere from ฿35 to ฿99, which is around $1 to $2.70. Durex condoms are the most expensive, followed by Okamoto, while condoms from Playboy and One Touch are the cheapest.

What I liked about the condoms sold here is that every box I looked at had one vital piece of information displayed on the back — the width of the condom. And we’ve written before about how that number is measured and why it’s important to consider it when choosing a condom.

The condom sizes I found ranged from 49mm in width (measured flat) up to 56mm. You can see all the condoms and their measurements in the size chart below. 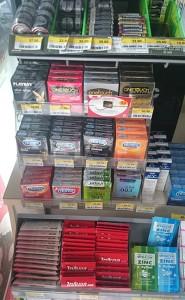 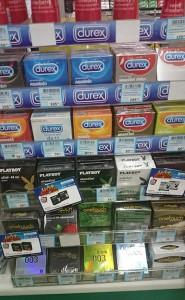 At 7-Eleven I found condoms from Durex, Playboy, Onetouch, and Okamoto. They are usually on display next to the cashier near the entrance of the store.

At Tesco Lotus you will mostly find the same brands and products found at 7-Eleven, and the prices are similar if not the same. You can see and browse all the condoms that they stock at this page of their online store.

I stumbled upon a big Watsons health care store and, expectantly, they had the largest selection of condoms. Besides all of the aforementioned condom brands, they were the only place that had a non-latex condom — Lifestyles SKYN. It’s also the only place where I found an Okamoto XL condom (54mm in width).

Which condom should you buy?

As you can see from the chart above, the selection is pretty solid and it is likely that you will find a good condom for yourself.
The first thing you should consider is your circumference (read this post on how to measure it).

Once you have this measurement, it’s easy to pick your condom: