Turn on your TV during summer time, and you’re guaranteed to find a movie that is, for the most part, all about romance. And because it’s summer, chances are that the main characters are making love in the water. Whether it’s at the beach, under the shower, in the jacuzzi or the public swimming pool, they make the idea almost irresistible and, above all, simple.

And then you think to yourself that if they’re having so much fun, you could do it too. But is it all really that fun and safe while being “at it” in the water, even if we disregard the fact that at any moment your actions could be captured on camera and get you fined and publicly shamed? Here are a few of the most common problems about having sex in the water, and a few suggestions of making the whole experience more pleasurable.

1. The water is not that clean 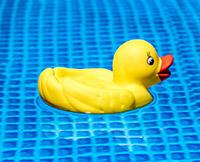 Swimming pools are probably your worst enemy when it comes to having sex in the water, and not just because there is a very high probability of getting caught by others. The most important problem is that it’s hard to let yourself go and enjoy the pleasure that your partner gives you, if you know how contaminated the pools actually are. Despite high hygiene standards that the pool cleaners are trying to keep, some swimmers, mostly children, will always break the rules and cause the water to be infested with microorganisms.

Of course, to prevent the contamination in the water as much as possible, swimming pools are regularly and thoroughly cleaned with chlorine. However, it doesn’t guarantee that it won’t cause skin irritations and infections, especially if the person is naturally more sensitive to chemicals. If the idea of having sex in the swimming pool is still alluring to you, oral sex would be a better idea, although it’s also not entirely risk-free.

Water is not your friend if you’re attempting to wear a condom. Not only will you have problems keeping it on under water, but it will also lose its purpose – to protect you from sexually transmitted diseases and pregnancy. That’s because condoms are made and lubricated with materials that don’t work well with water, and because water doesn’t prevent pregnancy or STD, make sure that you trust your partner completely in terms of their health – and that you’re completely prepared to become a parent.

Movies make it looks so simple, like there is no difference between having sex in the privacy of your own room and in the water. However, what the movies don’t tell you is that, for the most part, it’s very uncomfortable. Especially for women.

Even though sea water is much cleaner than that in a pool, there is still a problem of not enough lubrication. The vagina produces a natural lubricant when a woman is sexually aroused, but the water kills the lubricant and can, in turn, cause severe pain during intercourse, and kill the mood. Also, many couples who have tried having sex in the water reported that they had problems climaxing.

An additional problem is the uncomfortable feeling that you inevitably get if you’re attempting to do it in shallow water. You’ll either have a painful back from the tumbling pebbles and rocks you’re lying upon, or you’ll notice that sand is coming in where it shouldn’t, which can cause you more serious health problems later on.
In order to escape these problems, both in the pool and the sea, oral or manual sex might be better options. This goes especially for sex in the shower, which is yet another fantasy that the TV, books and movies are offering to us quite a lot and on a regular basis. Indeed, what could be better than to relax after an intense day with that special someone, on cold winter nights when we need that extra comfort and warmth, with a quick play time in the bathroom? Also, whereas it is hard to achieve an orgasm in the pool or the sea, a clever turn of the shower handle can do wonders for reaching that blissful state.

Of course, sex in the shower can be all these things, if you take every measure of precaution to keep yourself and your partner safe. One wrong movement in the heat of the moment and your foot can slip on the wet floor, causing damage to the head or a broken limb or nose. Not to mention that you can burn yourself with a heat regulator. If you’re really serious about having sex in the shower, investing rubber mats for the bottom of the shower to prevent unwanted slips would be a good idea. An additional form of security would be installing bars on the wall, which would serve to keep both you and your partner steady on their knees.

By hard work we mean your muscles will undoubtedly ache, whether you’re under the shower or somewhere in the water. Finding the right position could prove a bit challenging, and you’ll spend moments trying to figure out the best way to support each other, while at the same time keeping the closeness and maintaining the momentum of your love-making. Try to work on your strength and stamina.

I hope these suggestions will make your water sex experience more enjoyable. Have any tips to share? Feel free to comment below.