Just when you thought every sexual accessory imaginable had been created, now flavored condoms are taking many bedrooms by storm and offering up a unique (and tasty) way to spice up your love life.

These ingenious prophylactics are especially enjoyable for couples who love oral sex but want to take the extra step in practicing safe sex. Flavored condoms come in all different varieties, and some may even be scented. Indeed, there are enough options available to match any couple’s tastes or bedroom desires.

Most flavored condoms come in corresponding colors to match the particular taste. For example, white condoms may have a vanilla flavoring whereas red offers a sweet apple taste.

Can you use flavored condoms for vaginal sex?

This is because sugar can be harmful to the tissues in the vagina over a long period of time. Obviously, condoms are meant to protect, not harm, so as a rule of thumb, only use condoms with sugar when engaging in oral sex.

Almost every major condom manufacturer now carries flavored versions. Some of the best flavored condoms are made by leading companies like Lifestyles and Durex. 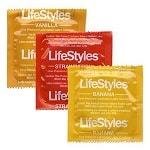 Lifestyles is regarded as one of the leaders in the condom market, and they now carry a line of sensual flavored condoms, as well. Their lineup includes condoms that taste like vanilla, banana, strawberry, blueberry, and even chocolate. Nearly all of Lifestyles flavored condoms are sugar free, making them completely safe for vaginal sex.

However, they still taste great and many users find them to be extremely pleasurable for oral sex. Some variations are also scented to further enhance the experience. Lifestyles flavored condoms typically come in packs of 3 or 12. One of their most popular boxes comes with an assortment of flavors, and includes Very Strawberry, Sensual Vanilla, and Tropical Banana.

UPDATE: Recently, Lifestyles also introduced a flavored version of their popular non-latex condom called SKYN Cocktail Club. It comes in three different cocktail flavors and you can order it here. 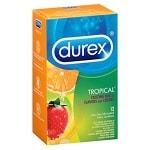 Durex is another leading condom brand that has recently branched into the flavor market. Like other brands, Durex offers flavors ranging from banana to strawberry to apple. Many Durex condoms do contain sugar, so it’s best to use them exclusively for oral sex.

A buildup of sugar in the vagina can often lead to yeast infections. Durex typically sells their flavored condoms in assorted packs of 12, although they can also be purchased in quantities of 36 or 100. The Durex Tropical Flavors variety pack is very popular among couples, and comes with three types: orange, banana, and strawberry, complete with corresponding colors.

Most flavored condoms come in a regular size so if you need something smaller or larger you might be disappointed. As some readers have been asking for a flavored condom with a more comfortable fit I looked out for large flavored condom and have found one that could fall in that category: EXS Mixed Flavoured.

Although it’s not labeled as large it would be a great choice for a lot of guys who usually seek a larger fit. The base width of this condom is 56mm (2.205 inches) and the top is even wider at 65mm (flared shape). Give it a try if your circumference is somewhere between between 5.1 and 5.5 inches. It includes several flavors: hot chocolate, strawberry sundae, ice cream, blueberry muffin, crazy cola, and orange soda.

In this day and age, it is easier than ever to practice safe sex. Although it seems like a hassle for some, condom manufacturers have gone out of their way to make condoms more fun and enjoyable. Flavored condoms are definitely a great way to spice things up in your love life.

Finding your favorite brand or flavor may require some experimentation, but you can definitely have some fun in the process. You may never go back to your old condoms again!