You might have grown up thinking condoms are one-size-fits-all. Or, you might have your ego tied into the box of extra-large Magnum XL Trojans on display in your bedroom. But the fact is, that condoms come in different sizes for a reason. Wearing condoms that don’t fit properly, whether they’re too big or too small, can lead to serious issues ranging from lack of pleasure to safety concerns.

In this article, we’ll look at 7 signs that your condom is too big or too small, and the dangers associated with wearing ill-fitting condoms.

Signs your Condom is too Big

Here are some signs your condom might be too big:

1. During sex, if you can feel your condom moving up and down on your shaft, it’s too wide.

2. If it feels baggy, it probably is too wide.

3. If the condom falls off during sex, it’s too big.

4. If your penis girth is below 4.7 inches when erect, a standard condom probably won’t fit perfectly. Consider sizing down to a snug/small size.

5. Is there a large amount of the condom hanging off the end of your penis? This likely means that your condom is too long.

6. Pull on the tip of the condom after you put it on. If it slides off easily, it’s too big.

Dangers of Condoms being too Big 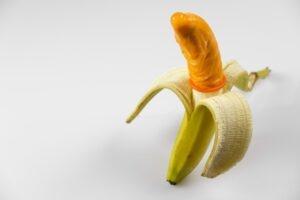 There are real dangers of using condoms that are too big for your penis. These can include:

Signs your Condom is too Small

Here are some signs your condom might be too small:

1. If a ring is left on your penis after removing the condom, it’s too tight.

2. The condom doesn’t cover your entire penis. The entire shaft should be covered. This increases the risk of STIs because part of your shaft is exposed.

3. If the condom feels like it’s squeezing your penis like a rubber band, it’s likely too tight. This can lead to loss of sensation, even loss of erection.

4. If there is discomfort when trying to put on the condom, it’s likely too small. It should hurt or be uncomfortable to put on a condom.

5. If it takes a long time to get the condom on, it might be too small. The condom should roll on fairly easily if it fits properly.

Dangers of Condoms being too Small

There are real dangers of using condoms that are too small for your penis. These can include:

There are two main measurements that we need to consider when finding the perfect condom size for your penis. The first is penis circumference, also known as girth.

Measure girth while fully erect, using a measuring tape around the shaft. Having the right condom width prevents a condom from being too baggy or too tight. Read this post to find out what would be the appropriate condom width in relation to penis circumference.

The second measurement is penis length. Measure this while fully erect, using a tape measure, and measure from base to tip. Having the correct condom length is crucial to prevent the condom from bunching up at the end, or not having any room.

To “wrap up”, finding the correct condom size for you is crucial to your safety and the safety of your partner. Many men have too much of their ego tied up in the size of their condom and penis, but if your partner is coming back regularly, obviously they like the size of your penis, so do both of you a favor and figure out your correct condom size.

Not only is this going to make it safer for both of you, but having a properly fitting condom will actually increase your enjoyment! Now grab a tape measure, and have fun.